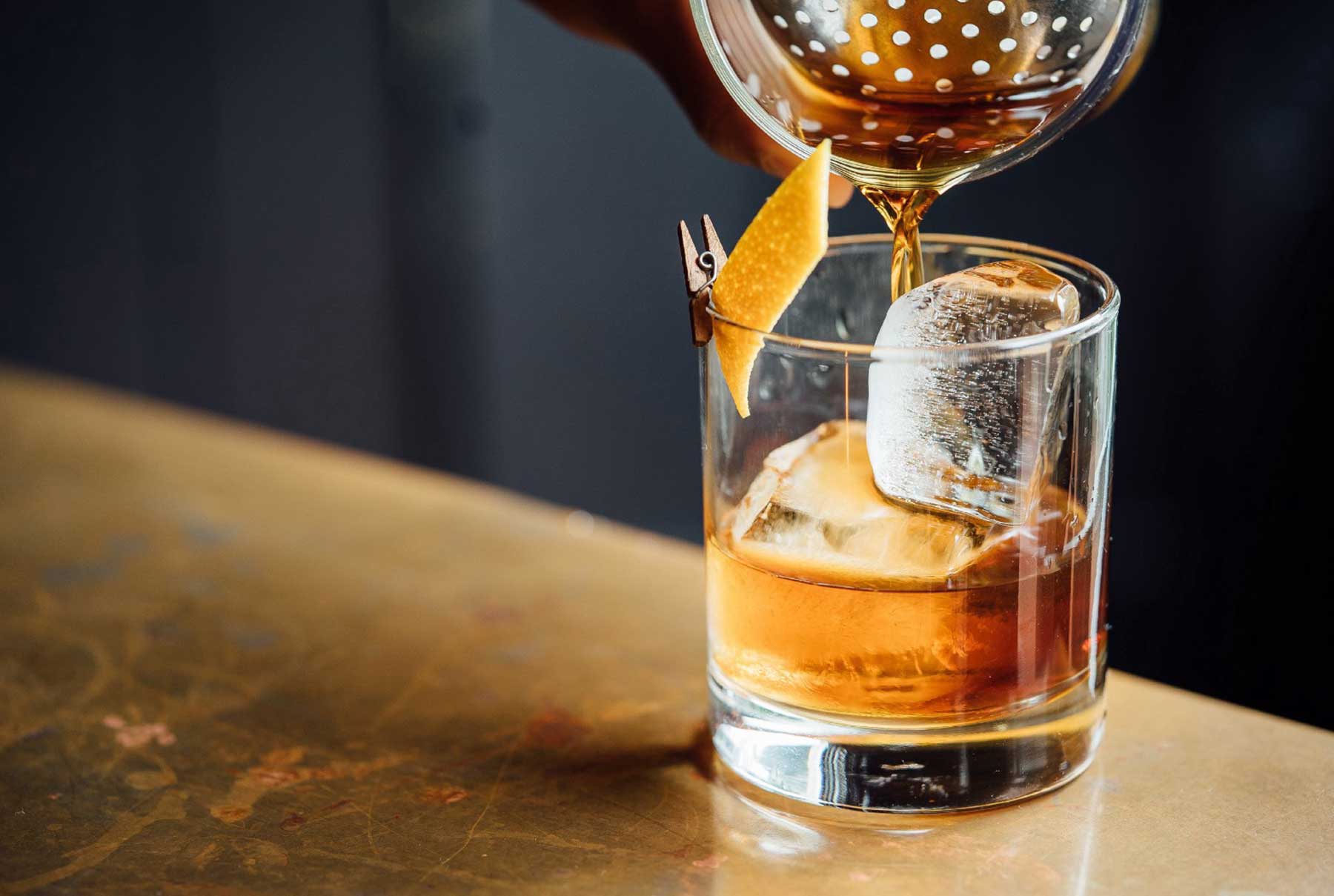 Are Alcohol-Free Bars The Future Of Going Out?

New York is always a ground breaking environment for the next cool thing on the food and drink scene and that landscape looks like it may be changing as the audience gets younger and looks to define what it wants and how it wants it.

Listen Bar, a pop-up in Williamsburg, Brooklyn is jam packed with the typical cool-kid crowd that defines this neighbourhood, crammed into a narrow bar with a pool table, neon signs, and plush wooden booths.

Basically, it’s your average night out in NYC. The only thing missing? Alcohol.

A booze-free bar but with a decidedly different vibe than that concept often implies. Listen Bar isn’t in-your-face or overly earnest about the fact that you won’t get drunk there. In fact, if you walked in off the street, you might not immediately notice that the artisan cocktails in everyone’s hand — which cost between $10-$12, and have names like “Leather Daddy” and “Spicy Titties” — are virgin. The menu centres on complex, flavourful, on-trend ingredients that feel exciting in their own right. One drink, we are told, the “Dollar Slice,” tastes kind of like a spicy Bloody Mary. Another, called “Beer But Make It Fashion” includes CBD, the marijuana-adjacent ingredient that won’t get you high but might help you feel a bit more chill.

Listen Bar founder Lorelei Bandrovschi states that there a lot of bars that offer an alcohol-driven experience, so she thought, why not add in some that aren’t built around alcohol? That means that we are for people who don’t drink, and also for people who sometimes don’t drink. Being non-judgmental is a really big part of it. For example, ‘if you’re coming in hungover from the night before, that’s cool.’ 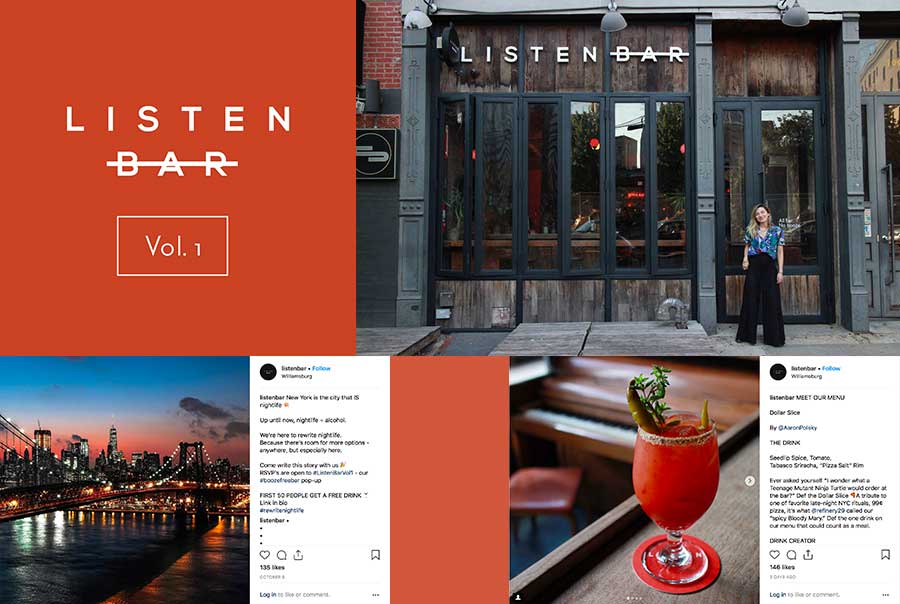 Bandrovschi personally falls in the latter category. She says she drinks sometimes, but after a friend dared her to take a month off from drinking as part of one of those Sober October/Dry January challenges, she found it was a choice she liked making. “When I first explored not drinking, it was this weird combination of feeling like I don’t need alcohol, but then feeling like, what else are you going to do?” she recalls. “It’s a familiar ritual that everyone around you has been participating in it in the same way for so long. But then you realise that when you step outside of it, you surprise yourself with how much fun you can have without drinking.”

Recent studies and surveys suggest that millennials imbibe less than previous generations. A widely-reported study out of the UK, conducted by BMC Public Health and published this year, found that 29% of 16- to 24-year olds were non-drinkers in 2015, up from 18% in 2005. And even if we’re still boozing, many of us are going out less: A survey published this year from market research firm Mintel noted that 28% of “young millennials” (people aged 24-31) prefer drinking at home to doing so in a bar or club.

Whether or not these stats resonate with you personally probably depends on a host of factors. But among the crowd at Listen Bar, one point seemed to come up again and again: Even if you’re not sober, even if you like to drink sometimes — or even pretty often — it’s nice to take a break. It’s refreshing to be in a space where you can catch up with a friend, hear some music, and not have alcohol be part of the equation.

Of course, there are coffee shops and restaurants, but they close early. Or you have to buy food. They’re also places where you’re less likely to strike up a conversation with a stranger, or find yourself suddenly belting out the words to some cheesy pop song playing. Bars have a certain kind of magic — but is it possible to maintain that sense of adventure without the signature ingredient?

Listen Bar isn’t the only place that’s tried this concept. North America has embraced this concept in it’s infancy. However, like Listen Bar, most seem to be short-term pop-ups, leading one to question how easy it is to turn a profit teetotaling?

“I think people are sick of having alcohol being tied to social life. People want to go out and they want to go places, but they don’t necessarily want to drink alcohol,” said 35-year-old Jess, an architect.”

In the past, “not drinking” has been synonymous with alcoholism, and indeed, it’s easy to envision people who are in recovery being appreciative of a place like Listen Bar, where they can hang out with friends and not feel alienated from that classic nightlife experience. But many of the people on the scene seem to have a less black-and-white relationship with drinking, citing relatively mundane concerns like not wanting a hangover or feeling like it’s hard to form genuine connections when alcohol is the driving force behind the night.

The proliferation of wellness culture also inevitably factors in. A few years ago, a booze-free bar might seem improbable in the so-called City That Never Sleeps, but thanks to the popularity of pricey pressed juices and exercise classes that double as places to see and be seen, there’s a reference point safely in place. Though, a lot of people are also turned off or intimidated by the wellness scene, which is why Listen Bar’s slightly grunge vibe is so notable. It really is just a bar.

Listen Bar and its ilk aren’t trying to be everything to everyone. They just want to be something to some people — and those people are not only growing in number, but also raising their voices about the nightlife experiences they crave.

While Listen Bar’s current pop-up series ended on 27th October, hopefully, Bandrovschi says, there will be more to come. And then, there are also people like Jess, who admitted she was looking to Listen Bar as a case study for a space she’s hoping to launch — a venue focused on alcohol-free drinks made with ancient Chinese herbs that will also have a yoga and Qigong studio in the back. There are also a growing number of companies, like Curious Elixirs, attempting to bottle some of the Listen Bar vibe for at-home consumption. All the better for those millennials who prefer to drink — or, not drink — in the comfort of their own apartments.

Is this just a ‘pop-up’ phenomenon or is there genuinely space in the market place for places like this in the UK? One things for sure, I think we may be about to find out this coming year.